Essay. What matters most (revised December 2011).

My husband and I married in late December because I had time off from medical school. We particularly cherished our wedding because it was Christmas time. Our last vacation together came 12 years after we married. Shortly after that, our devoutly wanted child was born. Joseph was and is beautiful. He also puzzles some of the best doctors in the U.S. with his atypical autism, bipolar disorder, compulsive behaviors, seizures, diabetes, and a list that goes on. After Joseph came, we didn’t leave home except for visits to family.

Seven years ago, we found a friend-caregiver who was comfortable and competent enough with Joseph that we could take a night off once a year and go away. It became our annual honeymoon. For December 2010, we went for a two-night splurge to the nearby New England town where we began our first honeymoon to read, walk, take photos, talk, and shop.

As we did a walk-through of shops (we buy many holiday gifts here, one reason several shop owners know us), I was struck by a banner with oriental design that hung from the wall of a gift shop. It read simply

In the end what matters most is

I thought about it the rest of the afternoon and through the evening, but my feelings were so strong and mixed I said nothing. It was beautiful, but poignant.  Eventually I realized part of its resonance was that it reminded me of a haunting poem by Emily Dickinson (a nineteenth Century woman born in this region marked by rock, forest, and water), a poem she called “After great pain,” which ended with the stanza

This is the Hour of Lead—

As Freezing persons, recollect the Snow—

The banner, I thought, was about how to live and how to die. When we went into the shop the next day I had decided not to mention it, let alone buy it, but ended up grabbing it at the last moment.

After two weeks of looking and thinking about the banner, we spent New Year’s Eve discussing 2010, our hopes and plans for 2011, and what means to be at mid-life. For us, it meant we need to be mindful of how well we can live our second half.

The year 2011 is drawing to a close. It has its high points, including a wonderful, refreshing three-day trip to the same town this year, the discovery of several wonderful forest paths within 10 minutes from home, the arrival of a much loved puppy Bjorn, my Swedish-born bear. It has had its downpoints. Our oldest dog, my beloved Tucket, died suddenly in May. Joseph was diagnosed with diabetes and his seizures are much worse. Today I will need to wash his mattress pad, bed linen, and two comforters (duvets) because he had a seizure overnight and wet the bed. Joseph is taller than his father and resembles a young oak tree. (His bladder capacity is impressive.) I have struggled with an infection in my arm that is hiding among old surgical scars left from operations in my twenties to repair an injury to a nerve at the wrist; an old enemy of mine, depression, recurred in late summer. I struggle with the steep swing in mood between days where I believe I can make a difference and days where I wonder how I can justify the food I eat.

In my childhood, I had more five-year plans than the old Soviet Union. I wanted to get into an elite university, do well, and graduate in three years rather than four so I could get to medical school faster. I accomplished those things. Their purpose was to allow me to become a doctor as soon as possible, so I would have as long as possible to help people. By finishing my medical education early, I could start a family earlier.

Less than a month after my twenty-fifth birthday, the plan derailed permanently. I had a head injury as the unlucky pedestrian in a car accident and lost five years until I got an accurate diagnosis, started effective therapy, and could think about a working life again. My husband lost the wife he knew and patiently cared for and loved the person I was (even though I had no clue who or what I was if not the woman I had planned to become).

It was looking at the banner that I realized somewhere in the 25 years since that accident I was able to let go of the original dream, distill what I wanted most, a life that made a difference and a family to love, and move on to become another woman. This is a life I never envisioned, but is a good life — I have family who love me regardless of whether I feel up or down.

Joseph was probably seven or eight when we took him to a specialist who saw children with cerebral palsy (Joseph has many of its characteristic problems, although not to the severity of diagnosing the disease). The doctor examined our son, looked at the list of therapies he was receiving through school and through our medical plan outside school hours, and he said “You know, eventually these kids get therapied out. There isn’t enough time or treatments to make a real difference, and they learn to hate life. Find something he can enjoy that has some recreational as well as therapeutic value, like horseback riding of challenge soccer, and let him have a life.”

Joseph still gets physical, occupational, and speech therapy at school (and he is still improving in some areas), but his time with us features swimming, walking, and horseback riding. Somewhere we learned to let go of the dream of “curing” Joseph and formed the dream of helping him become as independent, educated, and happy as possible.

At the residential school he has attended for two years he has become confident in what he can do, never dwelling on what he cannot do. Joseph rides an adaptive bike, plays modified bowling, draws through a computer. Just a few weeks ago he was one of the happiest members of the case of his school play, “The Grinch who stole Christmas.” His smile was as bright as the spotlights. 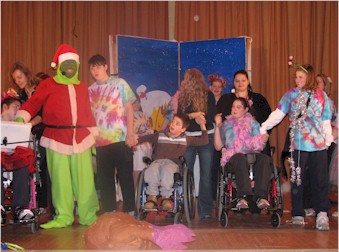 Life never goes as planned, and we all need to let go of plans along the way. The positive in the banner’s message, I think, is that it is not resignation at fate that is embodied in “letting go.” IF we cannot let go of what will not happen, should not happen, or simply no longer works, we cannot open our hands to see what we can hold next.

I do not practice medicine, but I discovered the importance of patient advocacy by living with chronic illness and found the resources to care for the child born to us. A year ago I felt the way I could most make a difference in life was to write more about living with limitation, finding a way to balance the needs and potentials of our spirits, minds, and bodies, so we live fully, whatever that means at any moment in time.

Now there is a website and a blog. A website for photos may get off the ground in 2012. After years off from public speaking and workshops, I spoke to a group of social workers about acting as an advocate for clients, and I loved it. A number of audience members asked questions, and several sent e-mails afterward. I would like to speak to more people next year.

This is the New Year’s message: What matters most is how we live, which is intertwined with how we love and how we learn to let go of the past to find our future. A friend wrote me once that the moments he felt most alive were when he let go of what he had been doing, had been thinking, and had the freedom to grasp something new, something that would give him forward momentum.

My banner does not trouble me: It inspires me. This year I want to open my hands to see what I can hold, and if need be, enjoy and let go. Time moves forward, and I will move with it, wherever it takes me. 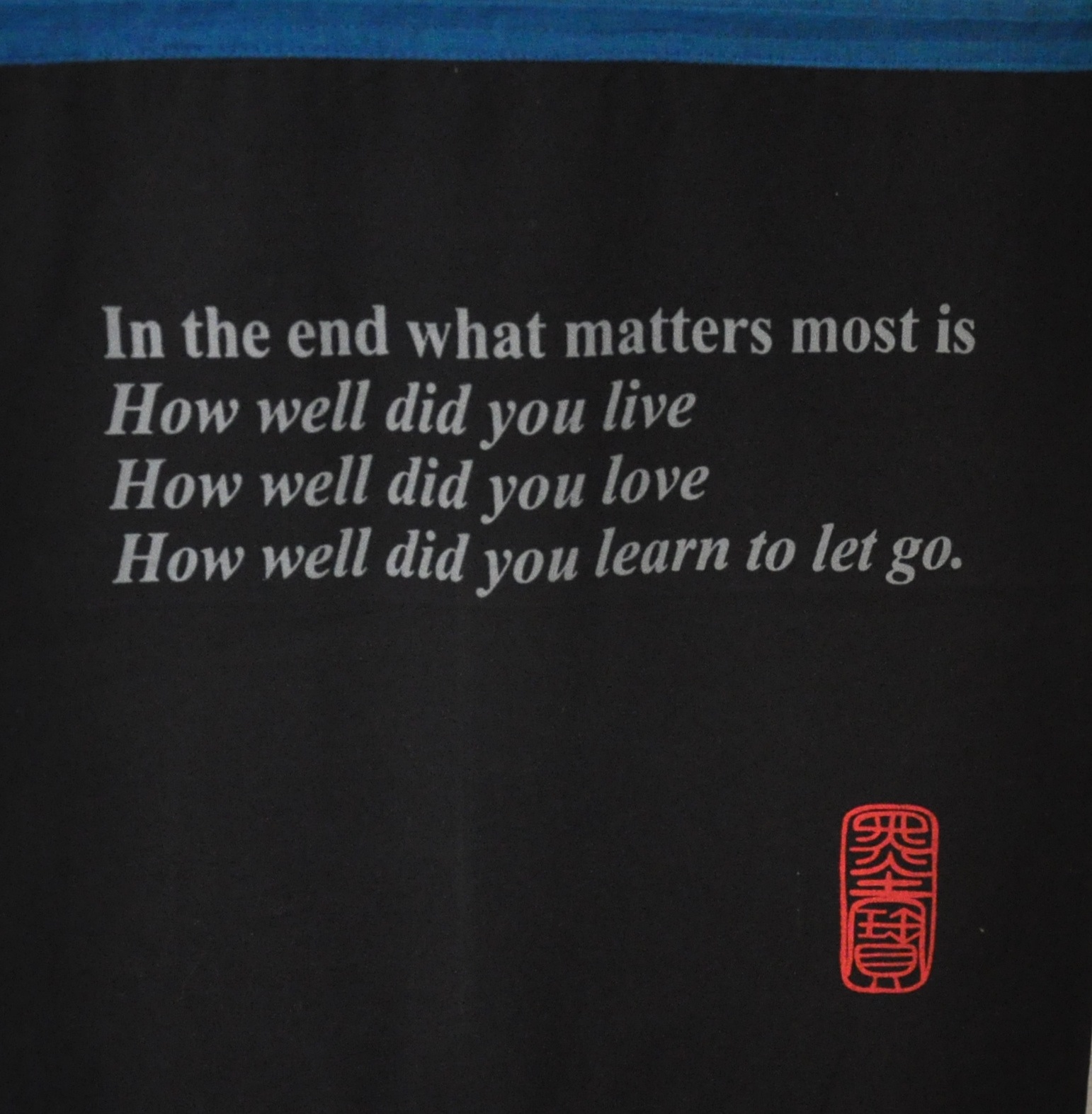 This entry was posted in Uncategorized. Bookmark the permalink.

3 Responses to Essay. What matters most (revised December 2011).