Essay. Dancing in the Dark. 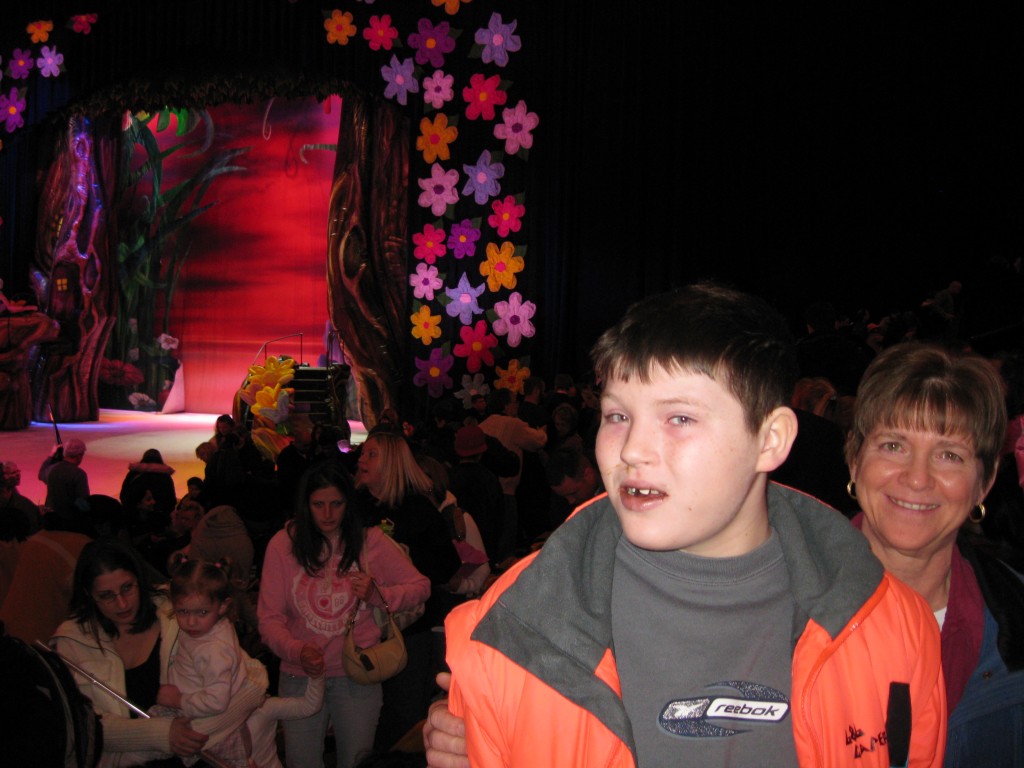 When I was little, love was a magical force that bound people together. While I knew people were very imperfect, love seemed to be beyond usual human limitations. Then I became a mother.

By the time Joseph was 2 years old, I knew my love was imperfect. He rarely spoke and when I could not guess what he wanted, he threw tantrums in the way only the uninhibited can. The only family member he did not hit or kick was Teddy, the dog who seemed to share a level of love with him that his parents could not.

When Joseph was 3, we learned he had autism. After several additional consults, I listened to a kind, senior doctor say that Joseph was “extraordinarily ill” with what proved to be bipolar disorder and that he also had symptoms of obsessive compulsive disorder and several other things. My child was a screaming, unhappy list of disorders. In his classroom, he would gouge his gums with his nails until there was bloody saliva all over his face, and the principal told us he might not be able to stay because of body fluid issues. My only child, for by then we realized that we could never care for Joseph and have another child.

The first time Joseph was awake for more than 24 hours we took him to the psychiatric emergency room. After a long wait, while he surfed over furniture and us while we tried to keep one eye on him and drift into something resembling rest, we were ushered into a small exam room from which they had removed absolutely everything in order to minimize the chance he could hurt himself. We were locked in, and we waited for someone to deliver us with an almost Biblical intensity.

At one point my husband, Jeff, knocked on the door and the security guard let him out so he could nap. I was alone with a child who was as tired and worn as I felt, and I could not comfort him. Instead, I kept him moving in a way I could predict. We raced from one wall to the other on our hands and knees. My hands seemed to land on every pebble and other piece of debris on the floor. I had to reach out and help Joseph turn when he reached the one wall or he would go back to his compulsion to lick the dust from the hole that a previous tenant had kicked in the plaster. In the end, we wasted hours and our remaining energy only to be told they could not find a psychiatric hospital bed for a screaming toddler. At home, we all slept.

When he was a little older, Joseph loved the programs on the two stations I allowed him to watch, Public Broadcasting and the Disney Channel. He delightedly sang along with Clifford the Big Red Dog, Winnie the Pooh, and the other members of his enlarging (and imaginary) circle of friends.

When we saw “Finding Nemo” on ice, I complained it made no sense to spend a lot of money for tickets to watch people on ice pretend they were tropical fish. We got handicapped seating, folding chairs on a large block of concrete with easy access to the exits. Joseph wasn’t there much, preferring to leave the loud, darkened arena for the well-lit halls, deciding what snack to buy and which gifts would come home. He came back in time to see the final act of family reunification, and he danced to the music while Jeff shadowed him and I held my arms out in case one or both of them fell.

Suddenly, Joseph was 18. After months to compile documents and visit lawyers, we went to the courthouse. Jeff and I sat for 2 hours in the poorly lit room while emergency cases were heard first. We held hands. We tried to guess whether the mood lighting was to keep the room as cool as possible with the accumulated body heat or the electricity budget had been cut.

When the judge called our name, we walked up to the table with our lawyer and the one appointed by the court to represent Joseph’s interests. They summarized him as a severely incapacitated, intellectually disabled adult who could not make decisions for himself and would always need a guardian.

The judge asked us what we could say about our son. I said he was very mixed in function. He is polite, sunny, stubborn, loves books, and is currently in love with the princess in the My Little Pony series. She smiled when we said we bring him home from his residential school when we can, and she signed the documents that formalized his status as a Peter Pan who will never grow up. Then we walked out of the courtroom, spoke briefly with both lawyers, and went home.

People are not perfect. I have tons of flaws. I do not have the patience with Joseph that my husband has, but I have been the mother who did what she could and enlisted help to do what she couldn’t, and that is the closest to perfection my love can come.

In a little more than 2 years, Joseph transitions from the special education system to the less nurturing system for adults. I worry about a future where staff are not charmed by his smile but get disgusted when he picks at itchy skin in a number of ungracious places if you don’t pay enough attention to him. (Among my tasks is a full daily skin check for eczema, psoriasis, self-inflicted scratches, and bruises. Although he falls less often now, he falls and bumps furniture with amazing frequency).

I worry because we realize he will never be able to dress himself, toilet by himself, or eat with utensils. After so many years of therapy in school, extra sessions at home or at a hospital, even therapeutic recreation, it is time to concede he will never have the fine motor skills of the average toddler.

Like the ice hockey arena and the courthouse, our home is unlit right now, a dusk hour not in summer, but early winter. Darkness comes in life, literally and figuratively. There is only one way to avoid it. You live with nothing to lose. Unfortunately, that means you live with nothing, and I cannot accept that. Joseph may cry and scream, but far more often he smiles and laughs. Jeff loves both of us and doesn’t remind me I was the one who insisted we have a child. The dogs think we are all fine and it is wonderful Joseph drops food for them.

So I take another position: Darkness does not matter because it is inevitable. What matters is that you find the hand you want to hold, the people with whom and for whom you would make a stand… that when you search your memories, you remember not the darkness, but that you were dancing. And despite all my fears, we have danced a lot.