Patient Advocacy. Disability and Safety in Public I. When private information needs to be taken outside the family. 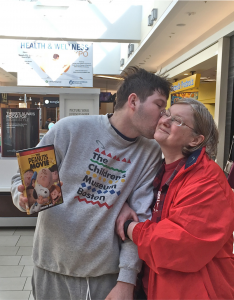 I never thought about disability until I was disabled at 25. For the first two years after my head injury, I was at home or with my husband. I didn’t think about the line between my privacy in public and the inability of others to help me if they didn’t know what I needed.

When I began speaking and traveling by myself, I thought differently. Now I also have an adult son with autism and seizures, I work with many families grappling with disability in loved ones, and I have too much experience to draw upon.

Based on experience and input from healthcare providers, special education personnel, and first responders including police, here are some things to consider as your circumstances or those of a loved one change over time.

If the decision is not forced on you (“Miss, Miss, what is wrong with you?”), you may realize you are at higher risk than benefit by keeping secrets. Others may find their disability may place someone else at risk of harm in certain settings.

The times our son’s conditions became widely known were more a series than a single moment. I talked to our neighbors when he was 3 years old and a bus began picking him up for his preschool program. I explained Joseph had autism, he could not talk, and he would never be outside our home without an adult unless our safety system broke. As always, I tried to explain, not complain, not defend, and we drew several neighbors readily into an extended safety net.

When Joseph was 5, I was in on a trip when I got an urgent call from my husband telling me not to worry, he had not been arrested. Joseph had melted down outside a store when he was told he was not buying anything. Someone saw my husband struggling with him and notified security about possible child abuse. When the security guard found my guys, Joseph was in a shopping cart without shoes, but more weepy than aggressive. He was clearly not a typical child. The security guard was apparently very kind, but he told my husband to leave before police arrived because they might not be familiar with autism.

At our next appointment with Joseph’s psychiatrist, he gave us several business cards with his pager information and the words AUTISM – BIPOLAR DISORDER written on the back. We were to carry one in our wallets and one, he suggested, should be carried by Joseph’s after-school caregiver.

We also got letters on medical school/ hospital letterhead for our glove compartments. These, the doctor advised, should be given to police as soon as they became involved if the card was not enough to de-escalate an incident.

A few years after that, the same doctor gently told us it was time to introduce ourselves to our police before there was an incident for which they might be called, from Joseph running away to his being aggressive with us in public or any third person he might bump, frighten, or otherwise induce to complain. I did this over the telephone because I was embarrassed. I advise people to do it in person at your local office and to follow up with a thank-you note. The note should document the visit, what you said, and thank the individual with whom you met. It can be a letter, email, or both. I have a file for such correspondence.

You decide what to tell police or fire about a medical condition, that your home has particular equipment, and that you want them to be able to respond to your family’s needs. Once you decide to share, tell the truth. Never lie to a healthcare provider or first-responder. They may make life-and-death decisions based on what you tell them. If you lie, someone may get hurt or die unnecessarily. I know one person who did not take this advice and they died needlessly.

When Joseph lived at home (he went to a residential school when he was 14), I was truthful about aggression toward us when aroused but was also clear and honest in saying Joseph did not have a malicious bone in his body. He had never attacked someone he didn’t know, even when highly aroused, and he had never followed someone who backed away from him. He did not understand weapons, but when out of control, he might throw whatever he was holding. I asked them to see Joseph as a very big, uninhibited toddler with limited abilities to talk and to understand spoken language, including commands.

We developed several other means of identifying ourselves in public. We often bought three similar, brightly colored T-shirts and wore them (with a fourth when we had progressed to a one-to-one caregiver in public) so it would be easy to point at the shirt and ask if a person saw someone who might have looked confused or awkward, spoke little, but might be moving rapidly by themselves.
Over time, we have found that far more people want to help when they are aware there may be a problem than there are people who flee in the other direction or just stand there as if you don’t exist. We frequent one mall. The staff at three different restaurants in the food court not only know Joseph by name, but also us, and they frequently talk to him and occasionally save children’s meal gifts for him. I have had strangers offer to guard our table if one of us is with him and he needs a bathroom.

Along with the general advice to always explain calmly, I suggest you ask each person you meet to discuss yourself or the loved one you represent if they have any questions or any advice. I have learned a tremendous amount in conversations that began with a simple exchange of information.

For instance, I am sorry that one of my son’s specialists has a sibling with severe mental illness, but very glad when she told me that one tip (matching shirts or jackets in public) had proved helpful when her sibling bolted with a panic attack in a busy shopping area. Distinctive or matching shirts also carry identity without stigma, something that may be very important to an elderly parent with moderate dementia or a teen who is more highly self-aware than my son.

After Joseph was frightened once when our car was pulled over to the side of the road in a string of others and we encountered a clipped, young state trooper who either did not notice or did not care that I was nervous and my son was terrified, I called the local barracks to make a teachable moment. I gave the trooper’s name and why his brusque, quick manner was more than I could manage with an autistic child in the back seat acting out because he was going to miss his therapy lesson and he had to be there for the therapy lesson on time.

I was surprised when the senior officer offered to have us visit the barracks so he could talk to Joseph, explain what troopers do, and give his troopers a chance to meet us.
Unless you are born without family and die very young, you will experience illness, injury, or disability, if not in yourself then in someone you love, a school- or work-mate, or a neighbor.
What I, and perhaps you, may also recognize is that the people who come to share your health information and special needs may not remain strangers who know your secrets, but rather people with whom you can be open, who become friends, even family.

I wear a safety pin in public to show I will help anyone who needs it or find someone who can help. I encourage others to do this or develop a habit of looking at people and really seeing them, yes, those whom you want to avoid, but more so, the many who are worth a smile, a nod of the head, or the moment to ask if they need any help. We are stronger — and safer— together.

The next article in this series will be on emergency drills, both at home and in public places. There have been terrorist attacks in many different types of public places, and violent crime can happen anywhere. I think it is particularly important to have drills when a family member is not consistently able to rapidly and completely comply with instructions.

This not only applies to people with recognizable behavioral disability but can also apply to family members who have a medical condition marked by chronic pain or temporary confusion. I also think that planning for different types of emergencies, such as going promptly to the storm shelter in locations with tornadoes, can only help the whole family communicate better and stay safer.

Do you have experience or advice to share? Can I help you? Comment or write me privately.

Share this piece widely. We are on Facebook and all of our essays and articles are online at healingwomanblog.net.